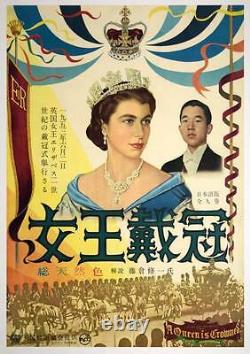 A QUEEN IS CROWNED (1953). Vintage and ULTRA RARE movie poster created for the Japanese release of the 1953 documentary filmed during Queen Elizabeth II's crowning narrated by sur laurence OLIVIER. This piece is very very rare as it includes the current Japanese emperor (son of Hiro Hito) who attended the ceremony. This is a true historical artifact and one of the only piece known around the world.

Format: B2: 20x28.5 (51x73 cm). Poster had been professionally linen backed. Image is of the exact poster. For larger quantities, a separate invoice will be sent. This is one of the many movie and music posters which can be found at ILLUSTRACTION GALLERY - ART THAT POPS! A brand new online poster gallery devoted to the celebration of the poster artists behind the art of the movie, music and comic book. We only sell Vintage and rare posters (no cheap reproductions). Specialized in art by Robert McGinnis Ray (Raymond Elseviers), Frank McCarthy, Gunther Kieser, Hans Hillmann, Jack Kirby, Marvel Third Eye Black light... As well as Steve McQueen, Audrey Hepburn, Clint Eastwood, Steve McQueen, Alain Delon, Jean-Paul Belmondo, Brigitte Bardot, Sophia Loren, Catherine Deneuve, Paul Newman, Raquel Welch and many other actors and actresses and Italian fotobusta (photobusta), Japanese B2 posters, Belgian posters, French posters, German A1 posters, Fillmore posters, Family Dog posters, Airlines and travel posters, Munich 1972 Olympics posters and many more colorful images which can be discovered on the site. Feel free to contact the gallery for any queries/questions. ILLUSTRACTION GALLERY - Art That Pops! This item is in the category "Entertainment Memorabilia\Movie Memorabilia\Posters\Originals-International\1950-59". The seller is "illustractiongallery" and is located in this country: US.