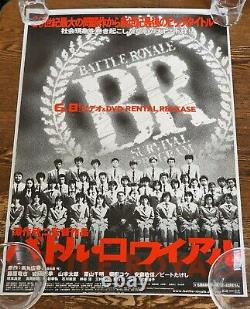 This is an original Japanese poster printed in 2000 for the video release of Battle Royale. This poster is in excellent condition.

Please refer to the imagery as this is the exact poster that is for sale. It is 21 years old! It is not a reproduction or a reprint.

Batoru Rowaiaru is a 2000 Japanese action-thriller film directed by Kinji Fukasaku, with a screenplay written by Kenta Fukasaku, based on the 1999 novel by Koushun Takami. Starring Tatsuya Fujiwara, Aki Maeda, Taro Yamamoto, and Takeshi Kitano, the film follows a group of junior high-school students that are forced to fight to the death by the Japanese totalitarian government. The film drew controversy, and was banned or excluded from distribution in several countries; Toei Company refused to sell the film to any United States distributor for over a decade due to concerns about potential controversy and lawsuits, until Anchor Bay Entertainment eventually acquired the film in 2010 a for direct-to-video release. The film earned critical acclaim and, especially with its DVD releases, drew a large global cult following.

It is often regarded as one of Fukasaku's best films, and one of the best films of the 2000s. In 2009, filmmaker Quentin Tarantino praised Battle Royale as the best film he had seen in the past two decades and even deems it as his favorite film. Battle Royale was the last film to be directed by Fukasaku. He also started working on the sequel titled Battle Royale II: Requiem, but died of prostate cancer on January 12, 2003, after shooting only one scene with Kitano.

His son Kenta Fukasaku, who wrote the screenplay for both films, completed the film in 2003. Battle Royale became a cultural phenomenon, and is considered one of the most influential films in recent decades, having been highly influential in global popular culture. Since the film's release, the term "battle royale" has been redefined to refer to a fictional narrative genre and/or mode of entertainment inspired by the film, where a select group of people are instructed to kill each other off until there is a triumphant survivor. It has inspired numerous media, including films, animation, comics, visual novels, and video games; the battle royale game genre, for example, is based on the film.