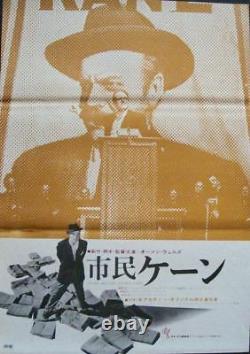 Vintage poster created for the Japanese rerelease in 1966 of the masterpiece drama directed by Orson WELLES starring himself and Joseph COTTEN. Format: B2: 20x28.5 (51x73 cm).

Light trifold due to the poster having been stored with tri- folded posters Japan used to sen then trim-folded (not hard folded) to the theaters. Will be sent safely rolled wrapped in a plastic sleeve then inserted in a sturdy cardboard tube.

For larger quantities, a separate invoice will be sent. This is one of the many movie and music posters which can be found at ILLUSTRACTION GALLERY - ART THAT POPS! A brand new online poster gallery devoted to the celebration of the poster artists behind the art of the movie, music and comic book.

Feel free to contact the gallery for any queries/questions. ILLUSTRACTION GALLERY - Art That Pops!

The item "CITIZEN KANE Japanese B2 movie poster R66 ORSON WELLES JOSEPH COTTEN NM" is in sale since Thursday, April 5, 2018. This item is in the category "Entertainment Memorabilia\Movie Memorabilia\Posters\Originals-International\1960-69". The seller is "illustractiongallery" and is located in New York, New York. This item can be shipped worldwide.