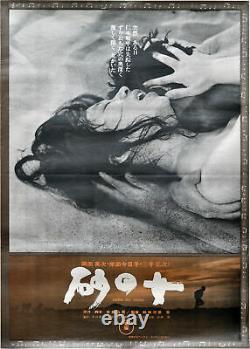 Description: Original Japanese B2 poster for the 1964 film. A masterpiece of 1960s Japanese cinema, based on the novel by Kobo Abe, which Roger Ebert described as a modern turn on the myth of Sisyphus. A schoolteacher, on an expedition to collect insects that inhabit sand dunes, becomes trapped with a widow in a hut inexplicably built at the bottom of a sand quarry.

Very Good or better overall. Subject: 1960s Cinema, Directors, Film Posters, Japanese Cinema. Royal Books is located in the midtown area of Baltimore, Maryland. Since 1996, we have specialized in rare books and paper relating to twentieth century literature, genre fiction, the arts, and popular culture, with a particular emphasis on cinema. All books noted as First Editions are also First Printings unless indicated otherwise.

This listing was created by Bibliopolis. The item "Hiroshi Teshigahara WOMAN IN THE DUNES SUNA NO ONNA Original Japanese #140078" is in sale since Tuesday, June 9, 2020. This item is in the category "Entertainment Memorabilia\Movie Memorabilia\Posters\Originals-International\1960-69".

The seller is "vanburenantiques" and is located in Baltimore, Maryland. This item can be shipped worldwide.