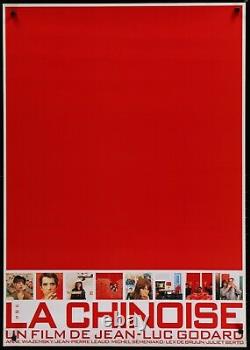 Original, unfolded 1990's re-release Japanese poster for the 1967 French film'La Chinoise', directed by Jean-Luc Godard and starring Anne Wiazemsky, Jean-Pierre Leaud and Juliet Berto. Great design that was only used for this Japanese re-release of the film, which was made in 1967, first released in Japan in 1969 and re-released subsequently.

This poster was used for a circa 1996 re-release. Please note that the magnets in the borders are used during the photographic process and are not pushpins or elements of the design.

PLEASE SEE OUR OTHER AUCTIONS AND STORE ITEMS FOR COOL MOVIE POSTERS. It must come back in the same condition as it was sent. FILM/ART has one of the finest collections of original movie posters. The item "LA CHINOISE unfolded Japanese 28x40 poster EXC Jean-Luc Godard FilmArtGallery" is in sale since Wednesday, March 6, 2019. This item is in the category "Entertainment Memorabilia\Movie Memorabilia\Posters\Originals-International\1960-69".

The seller is "filmartgallery" and is located in Los Angeles, California. This item can be shipped worldwide.