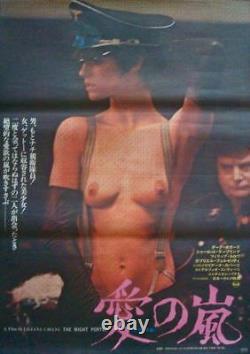 NIGHT PORTER - Il portiere di notte (1973). Vintage poster with superb new design created for the first Japanese release in 1975 of the Nazi sex war drama movie directed by Liliana CAVANI starring Dirk BOGARDE and Charlotte RAMPLING. Format: B2: 20x28.5 (51x73 cm). Poster had been stored with trim-folded posters hence the waviness when i took the picture, It has laid pressed flat since. Will be sent safely rolled wrapped in a plastic sleeve then inserted in a sturdy cardboard tube.

We have over 900 sexploitation movie posters in the Gallery. This is one of the many movie and music posters which can be found at ILLUSTRACTION GALLERY - ART THAT POPS!

The item "NIGHT PORTER Japanese B2 movie poster CHARLOTTE RAMPLING NAZI SEXPLOITATION NM" is in sale since Thursday, May 24, 2018. This item is in the category "Entertainment Memorabilia\Movie Memorabilia\Posters\Originals-International\1970-79". The seller is "illustractiongallery" and is located in New York, New York. This item can be shipped worldwide.