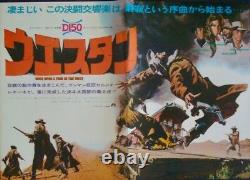 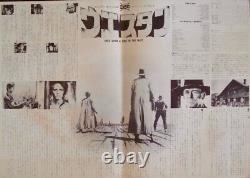 ONCE UPON A TIME IN THE WEST (1968). C'era una volta il West. Vintage double sided press movie poster created for the first Japanese release in 1969 of the Sergio LEONE directed Spaghetti Western classic starring Claudia CARDINALE, Henry FONDA, Charles BRONSON, Jason ROBARDS, Gabriele FERZETTI, Jack ELAM and Woody STRODE. Format: B3: 14x20 (36x51 cm). Will be sent safely rolled wrapped in a plastic sleeve then inserted in a sturdy cardboard tube. For larger quantities, a separate invoice will be sent. This is one of the many movie and music posters which can be found at ILLUSTRACTION GALLERY - ART THAT POPS!

Feel free to contact the gallery for any queries/questions. ILLUSTRACTION GALLERY - Art That Pops!

The item "ONCE UPON A TIME IN THE WEST Japanese B3 movie poster LEONE CARDINALE FONDA 1968" is in sale since Thursday, February 7, 2019. This item is in the category "Entertainment Memorabilia\Movie Memorabilia\Posters\Originals-International\1960-69". The seller is "illustractiongallery" and is located in New York, New York.