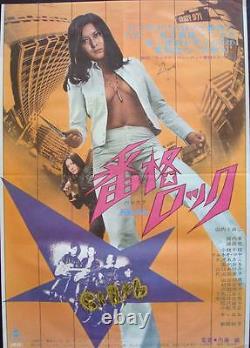 This is one of the many movie and music posters which can be found at ILLUSTRACTION GALLERY - ART THAT POPS! A brand new online poster gallery devoted to the celebration of the poster artists behind the art of the movie, music and comic book. We only sell Vintage and rare posters (no cheap reproductions). Specialized in art by Robert McGinnis , Ray (Raymond Elseviers), Frank McCarthy, Hans Hillmann, David O'Daniel, Todd Slater, Jack Kirby, Jim Steranko, Marvel Third Eye Black light, Rick Griffin...

This item is in the category "Entertainment Memorabilia\Movie Memorabilia\Posters\Originals-International\1970-79". The seller is "illustractiongallery" and is located in New York, New York. This item can be shipped worldwide.