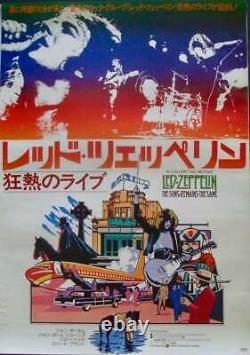 The SONG REMAINS THE SAME (1976). Vintage movie poster created for the 1977 Japanese release of the Musical documentary filmed during Led ZEPPELIN's shows at Madison Square Garden in 1973. Format: B2 20x28.5 (51x73 cm). Will be sent safely rolled wrapped in a plastic sleeve then inserted in a sturdy cardboard tube. For larger quantities, a separate invoice will be sent. This is one of the many movie and music posters which can be found at ILLUSTRACTION GALLERY - ART THAT POPS!

The item "SONG REMAINS THE SAME Japanese B2 movie poster LED ZEPPELIN 1976 NM" is in sale since Wednesday, May 8, 2019. This item is in the category "Entertainment Memorabilia\Music Memorabilia\Rock & Pop\Artists L\Led Zeppelin\Posters". The seller is "illustractiongallery" and is located in New York, New York.